The question of restoring trade with India can be considered within certain parameters. 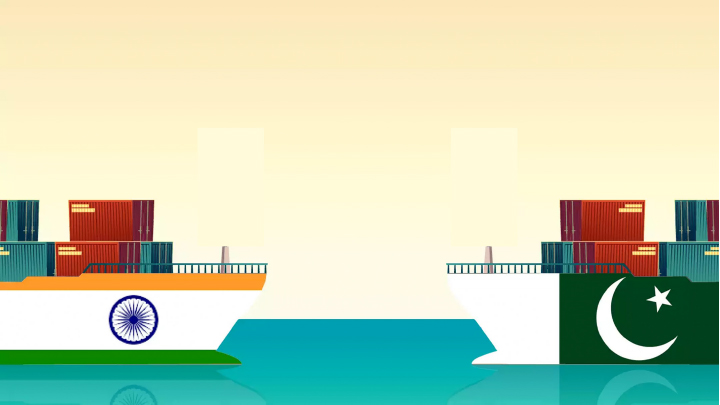 Grant of MFN and trade with India has always been a contentious issue for all governments in Pakistan. Many time, the decision to grant MFN status was withheld just before its announcement. The issue has never been economically and legally debated and a solution of Kashmir first, has always been the basis of decision. However, India unilaterally granted MFN status to Pakistan in 1995 - Pakistan has been regulating trade with India through various lists, based on tradable items and then by maintaining a negative list. However, Pakistan suspended trade with India after revocation of Article 370.

Apart from the advisor, some international organizations are emphasizing trade with neighbouring countries. Even domestic circles are advocating opening of trade relation with India. The issue, however, is extremely complex and needs to be decided prudently, considering all legal and economic implications.

Pakistan and India both being part close to Britain, got accession to the General Agreement on Tariffs and Trade (GATT) in 1947, now called GATT 1994. Since the two countries had long constituted one economic unit, GATT has a special provision for the two countries, which reads “Taking into account the exceptional circumstances arising out of the establishment of India and Pakistan as independent states and recognizing the fact that they have long constituted an economic unit, the contracting parties agree that the provisions of this Agreement shall not prevent the two countries from entering into special arrangements with respect to the trade between them, pending the establishment of their mutual trade relations on a definitive basis.”

At the Review Session of 1954-55, the need for this provision was considered and it was retained at the request of both the countries. Since then neither Pakistan nor India has approached GATT / WTO for rescission of this clause.

MFN Treatment is one of the general principles of GATT 1994 covered under its Article I, which lays the principle of non-discrimination amongst the WTO Members with respect to (i) customs duties and charges of any kind imposed on or in connection with importation or exportation or imposed on the international transfer of payments for imports or exports, (ii) the method of levying such duties and charges, (iii) all rules and formalities in connection with importation and exportation, and (iv) advantage, favour, privilege or immunity granted to a WTO member to any product originating in or destined for any other country and has to be accorded immediately and unconditionally to the like product originating in or destined for the territories of all other WTO members. However, some exceptions to the provisions of Article-I covered under various GATT Articles include (i) the enabling clause that includes (a) Generalized System of Preferences (GSP), (b) differential and more favourable treatment in respect of non-tariff measures, (c) arrangements among developing countries as a whole or among a few of them on tariff preferences, and (d) special treatment of the least developed countries in the context of general or special measures in favour of developing countries, (ii) Free-Trade Area and Customs Union under Article XXIV, (iii) Frontier Trade Advantages under Article XXIV. (iv) Government Procurement, (v) General Exceptions contained in Article XX, (vi) Security Exception in terms of Article XXI, (vii) Trade Remedy Laws, and (viii) Plurilateral Agreements.


Under Article-V on Freedom of Transit of GATT, each WTO member country (WMC) has to allow passage through it, to goods which another WMC decides to export to a third WMC. Traffic of this nature is termed in this Article as “traffic in transit”.

At present, trade between India and Pakistan is restricted under this GATT Clause. Besides, the clause does not permit India to transport goods to Afghanistan and the Central Asian states through land routes of Pakistan. After the grant of MFN status, India will be automatically authorised to export its goods through Pakistan, claiming the legal facility of “traffic in transit.” Misuse of the Afghan Transit Trade Agreement and its adverse effects on Pakistan’s industry is hidden to none.

Article XIII of GATT on Non-discriminatory Administration of Quantitative Restrictions requires that no protection or restriction can be applied by any WMC to the product of the other WMC. In view of this position, Pakistan will not be able to take any discriminatory measures to prohibit or restrict the imports or exports of any product being “traffic in transit”.

Grant of MFN Status to India will have a far-reaching effect on Pakistan’s industry. Aspects which need to be considered while granting MFN status to India, include (i) assessment of comparative and competitive advantages available to Indian industry in the shape of cheaper cost of raw material, cheap skilled/unskilled labour force, low financial and electricity costs and the overall cost and ease of doing business, (ii) economies of large-scale production, (iii) larger industrial base, and (iv) technological advancement, etc.

Moreover, India’s trade and industrial policies have to be critically examined in the following light: (i) incentives to export industry and consistent tariff policy, (ii) specific hidden subsidies, granted to the Indian industry for its export promotion, if any, and (iii) its level of bound duty rates under Market Access Negotiations under the WTO and placed under Article II on Schedule of Concessions of GATT 1994. It should be kept in mind that India’s trade policies are not very transparent.

Likewise, weakness of Pakistan’s trade and industry also need to be assessed to match with those available to Indian trade and industry. Moreover, economic and regulatory governance in Pakistan is very poor. After suspension of trade with India in August, 2019 imports, were circumvented through duty-free ports. Cotton yarn, industrial chemicals and pharmaceutical inputs are some examples.

In case trade between the two countries is restored or India is granted MFN status, the major role to be played to protect domestic industry from unfair, subsidised and dumped Indian goods will have to be played by the National Tariff Commission (NTC), which is the regulatory authority to administer trade remedy laws under the WTO regime. NTC has only been able to develop expertise in anti-dumping duties. Issues pertaining to safeguard measures, subsidies and countervailing duties have seldom been referred to.

It is observed that very few anti-dumping duty cases executed by the NTC could sustain legal tests; some are lingering in the Appellate Tribunal and others were struck down by the superior courts. Moreover, poor legal governance in the NTC is itself now surfacing due to misinterpretation of Anti-dumping Duties Act, 2015, especially with reference to the applicability of Section 2(d) in cases pertaining to cotton yarn, printing ink and polyester staple fibre. The textile industry has adversely been affected and is agitating the issue at various forums.

The Drug Regulatory Authority of Pakistan (DRAP) has formulated a policy for manufacture of raw materials for medicines in the country, as industry fulfils 85% of its requirements through imports from China and India. India has highly developed raw material industry. It will have a lot of implications on Pakistan’s raw material industry if at all established. This shows that there is no coordination between the MOC and the Health Division.

The situation demands that before granting MFN status or restoring trade with India, a detailed study should be carried out which should consider (a) India’s capability of producing poverty friendly goods and how Pakistan’s poverty stricken population can benefit from them. Moreover, their cost competitiveness will force many production lines to charge a normal rate of profit, thus reducing inflationary impact, (b) identification of the industrial sectors and formulation of a protection policy which is likely to be hit hard by opening of trade, (c) benefiting from the special clause 11 of GATT Article XXIV which affords a special provision for Pakistan and India entering into special trade arrangements. Pakistan should phase out opening of trade with India, (d) concerns of the stakeholders should be taken into account, (e) industry should identify raw materials and inputs which can be imported from India required to produce competitive goods included in various FTAs. The overall impact on SAARC also needs to be assessed.

The writer is former Chairman National Tariff Commission Ex- Consultant NAB and the World Bank. He can be reached at abbasraza55@gmail.com