From conventional advertising, brand promotion has come down to logos and sponsorships. 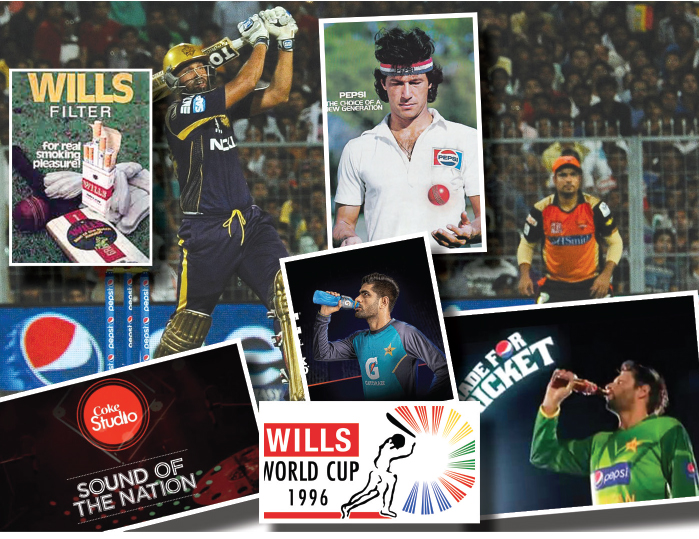 Pakistan’s most loved sports outfit exhibits the Pepsi logo. Not to be outdone, soft drinks rival, Coke is plastered on a popular music genre. You are never away from some advertising of the sugary drinks.

A reported word of mouth is that it is essential to drink 7Up after meals as it “aids” digestion. The entry and market fortification of sugary drink is not new. Coca Cola arrived in Pakistan in 1953. Rival Pepsi had a shaky start to its innings. It entered the Pakistan market in 1959 but exited in 1963 due to dipping profits. However, it made a re0entry in 1979 with its famous skateboarding TV commercial which was translated into Urdu. It was the official drink of the 1996 Cricket World Cup, jointly hosted by India, Pakistan and Sri Lanka. The numbers don’t support the job creation argument. Coke franchise-holder in Pakistan, CCBPL has 6 plants and 13 warehouses throughout the country, employing 4,550 people. The output is 111 million physical cases. “CCBPL is a significant player in the growth of Pakistan’s economy since it is one of the country’s top foreign direct investments in FMCG (Fast Moving Consumer Goods) business and is one of the major tax paying beverage companies of Pakistan,” says Shabbir Kazmi, a Pakistan-based economic analyst.

When Pepsi abandoned local pop music in the early 2000s (focusing only on cricket), Coke filled the vacuum with Coke Studio – a show which became a massive hit in the region. In a reversal of fortunes, for the first time in many years in Pakistan, Coke became a trendsetter and Pepsi, the follower. The drinks continue to spread their tentacles. In modern times, sports have become a rags-to-riches avenue. Now Pepsi hoists a commentators talent find with its “Pepsi Voice of Pakistan Cricket.” Another internationally and now also Pakistan popular sports associated product is Gatorade. “While Gatorade is one of the biggest brands in the sports drinks industry, its nutritional merit is controversial. Is it a sugar-bomb that you should avoid at all costs? Or is it a nutritious option for hydration? The answer, as is the case with many nutrition debates, is not so simple,” writes Chrissy Carroll, RD, MPH, a U.S.-based dietitian.

The reason Gatorade includes so much sugar (34 g.) is that sugar can be useful during prolonged exercise. However, this is most relevant to serious athletes who are exercising for longer periods and with intensity. Casual consumption of Gatorade and other sweetened beverages can be problematic because sugary drinks like soda, sports drinks, energy drinks, lemonades, and sweet tea have been associated with obesity, weight gain, and other health problems. Are people aware of this, especially when powerful corporations hammer them – and intensely - with only their side of the story?


The International Diabetes Federation Diabetes Atlas (9th Edition) reports that the prevalence of diabetes in Pakistan has reached 17.1%, which is 148% higher than previously reported. In 2019, over 19 million adults in Pakistan were estimated to be living with diabetes – putting them at risk of life-threatening complications. Indeed, sports people need to be compensated and organizing of sports events need to be funded and lavishly. Despite the Rs. 1 million Qaumi Sehat Card, should people afford to suffer from this awful disease all in the name of health entertainment?

Tobacco kills over 163,600 people each year in Pakistan while almost 31,000 of these deaths are due to exposure to secondhand smoke, according to the Global Burden of Disease (GBD) 2019. The economic cost of smoking in Pakistan is Rs 615.07 billion, equal to 1.6% of the nation’s GDP. In 2019, the economic cost of smoking was about five times greater than the revenue from the tobacco industry, as per the research titled ‘The Economic Cost of Tobacco-Induced Diseases in Pakistan’. Euromonitor International (2018) informs that international companies hold almost all of the cigarette market in Pakistan. In 2017, British American Tobacco led with 65.6% of the retail volume market share, and Philip Morris International followed with 30%. In Pakistan, 52 billion cigarettes were sold in 2017. Consider the profits they repatriate, when the country is always facing a foreign exchange dearth. A 2012 study carried out by Researchers Sara Saeed, et al revealed that that almost 63,415 males and 85,590 females were diagnosed with the disease.

Another study carried out by Franca-Botelho, et al, found that approximately 40,000 females succumb to breast cancer every year in Pakistan. This study found the most common factor responsible for cancer reported by patients included gutka consumption (71%), betel nut (70%) and smoking (68.4%). Thankfully, tobacco companies are no longer sponsoring sporting events, nor featuring athletes.

Pakistan has banned the promotion of cigarettes across the country. Posters or banners that promote smoking cigarettes were also banned. Ironically, an increase in taxes has benefitted the illegal cigarette brands as they have captured a 40% market share. The order approved on Jan. 30, 2020, banned online advertising of tobacco products, as well as point of sale advertising and display of tobacco products. This regulation completed and expanded on the previous Prohibition of Smoking and Protection of Non-smokers Health Ordinance from 2002, which included a ban on advertising of tobacco products in print and electronic media. With this ban, the tobacco industry now isn’t even able to sponsor events which was another way for them to advertise and reach the masses. According to Global Adult Tobacco Survey Pakistan (2014), almost one in five adults in the country used tobacco in some form, which translates into 25 million adults currently. Consequently, prevalence of tobacco-related diseases is also high and various estimates indicate that tobacco use is associated with more than 100,000 deaths every year in the country. Pakistan Economic Survey 2017-18 estimated the total expenditure of Rs. 150 billion on cigarettes.

Tobacco’s share in total industrial output is 1.1%. The share of cigarette industry in the industrial employment is less than a half per cent only (0.3%). The industry, instead of earning foreign exchange by capitalizing agriculture production, causes a drain on foreign exchange as a net importer, says a Policy Brief prepared by the Social Policy and Development Centre. The WHO has called upon Pakistan to increase tobacco taxation (currently at 45.79%) to 70%. Pakistan has a complex three tier tax system, which indirectly boosts cigarette production and consumption, against the spirit of Pakistan’s WHO-FCTC commitments. Currently, Pakistan is facing annual revenue losses of Rs.30 billion due to low taxes on the tobacco industry, while the health of the nation’s youth is at stake, says another research study. One can hope that once the country’s industrial base builds up, other industries and services can step up to become sponsors, like the national team wearing the PIA jersey. However, sports organizers need to search and reach out. In fact, why not take a loss for the nation’s health?

A magazine editor in his other life, the writer blogs at https://chaiwhy.wordpress.com