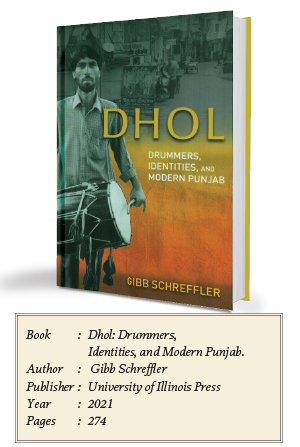 Six hundred words worth of a review is simply not enough to do justice to this erudite and remarkably well-researched work. Schreffler writes on the dhol (which very loosely translates to ‘drum’) an instrument that, though taken for granted by now, by Pakistanis and Indians alike, is in reality one of the most complex musical tropes of the sub-continent. At least that is what Schreffler’s text indicates; the book being based on extensive research spanning a couple of decades. But Schreffler is not simply a respected and dedicated academic teaching at Pomona College; he himself is a dhol player and studied under the great Punjabi dhol-master, Garib Dass.

The author begins by laying down a foundational study of the historical structure and background of the Punjab, paying especially close attention to the point that geographical boundaries are primarily artificial constructs, although he does indicate later in the book that there is a difference between the earthy and rustic dhol-playing style of the Indians and the more sophisticated and classical rhythms of Pakistani dhol music. It is evident that the writer took his personal dhol-playing very seriously; he alludes to the ustad-shagird relationship and the guru-chela relationship as both being valid determinants of dhol teaching and instruction, with the spirituality of the latter amalgamating and dominating the direction of the former.

His respect for Garib Dass is absolutely sincere and unwavering. He pays homage to his teacher’s background by painstakingly describing the history of the Bazigar people from whom Dass hails. Born in the late 1930s, Dass learnt dholin a music-oriented family from a very early age, and as he improved and his playing gained renown; he was able to move his family from kacchi abadis to pakki ones. Schreffler takes time to write out the scores of certain dhol rhythms, noting that although the instrument can lend itself to a variety of them, often some players just use a basic luddi beat while playing. This is familiar to those of us who attend weddings, which have always been dominated by the use of this instrument, but the author demonstrates a cultural sensitivity when he emphasizes that the dhol was virtually never used at funerals except for that of one great master who had lived a long and happy life and died of extreme old age.

The author’s sensitivity extends to describing the life of the players, who often come from very poor families and are sadly not as lucky or successful, as was his own teacher. Many dhol players fall victim to alcoholism, partly due to the stresses of poverty. Again, Schreffler displays a fine sense of humanitarianism by speaking with delicacy of players belonging to the churra class (he uses the gentler term ‘sweeper’ for them) who eventually labeled themselves sains, in order to avoid the stigma that the former word unfortunately entails. His command over ethnography is firm and rigorous, but he truthfully mentions that while it is one thing for such an instrument and its players to be recognized by an academic, often alas they remain unappreciated by their own nations and societies due to social stigmatization.

The author does comment on the Punjabi Diaspora and the rare migration of dhol playing families abroad, as well as the far more common usage of the dhol now in the West, including both the UK and US. It is charming to note the difference between ethnic instruments and those that are mass-produced abroad for use in musical stores. He also mentions websites on dhol, the creation of which brought several players and enthusiasts together. Even in Brooklyn, New York the drumbeats of the dhol were used to wake people before sunrise during Ramadan.

In aggregate, the book is a very satisfying read, albeit challenging in more ways than one. Schreffler should, however, be highly commended for actualizing his personal passion in academic form for the benefit of the reading community at large.