Notes on an Execution 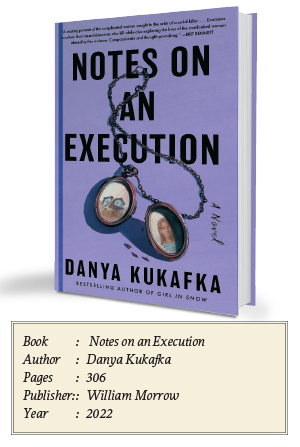 ‘Notes on an Execution’ by Danya Kukafka burrowed deep under my skin from the opening pages. The novel speaks to our ever-growing obsession with true crime and murderers of the very worst pedigree. Everywhere you turn, whether Netflix, Prime or podcasts, someone is trying to make art from death.

According to researchers, the biggest consumers of the genre seem to be women. It has been suggested that this is largely owing to our desire to pick up ‘tips’ to keep us safe. To learn how not to get murdered. The implication, of course, being that the victims did something ‘wrong’. The onus shouldn’t be on women to restrict ourselves, but it is. What saddens me about the rise in popularity of the genre is our morbid fascination with evil men. Where are the voices of the victims? Do we even know their names?

The book explores this issue in great depth. And what about the stories we don’t hear? Whose voices are missing from the narrative? Danya Kukafka specifically homes in on those stories. ‘Notes on an Execution’ goes some way towards bridging the gap between what is seen and what is not, as it ploughs the hidden depths of devastation wrought by the violent loss of life.

Ansel Packer (great name for a serial killer!) is on death row awaiting execution. With the clever use of second person narrative, the author draws the reader right into the heart of the story.

By unveiling Ansel’s history in this way, Kukafka forces us to see things through his eyes. To examine our empathy. To walk the proverbial mile in his shoes. It’s a mighty uncomfortable place to be. Whilst this makes it easier for us to sympathise with the murderer, I think it’s important to remember that ultimately every one of us has a choice – to offend, or not. As such, surely it’s time we stopped making excuses for violent men? We all have choices to make. Always.

Ansel’s story weaves through the narrative, meandering across timelines, but the real focus of the book is on the women affected by his actions. We (unusually) spared the gory details of the deaths; the victims afforded a dignity often lacking in crime fiction. Too often, in life and in fiction, victims become a footnote in their own lives. Furthermore, when you take a life, you don’t just kill a person. You eliminate every possible future they might have had. For example, you extinguish the lives of any children they may have produced. All that potential is snuffed out. The ripples extend far and wide, and can have devastating effects on entire families and communities.

In the book, we see this in particular through Hazel’s narrative but also in Saffy’s imaginings of the Girls. Ansel’s victims are collectively referred to as “the Girls” although this does not appear intended to diminish them in any way.

The women in this novel form a formidable ensemble cast. We have Ansel’s mother, Lavender. The desperate parent who makes the ultimate sacrifice, albeit tinged with a smidgeon of self-preservation and escape. Lavender’s story poses the questions ‘Is it wrong to save yourself? To secure your own freedom by extreme measures?’ Then there is Jenny, who loves Ansel, and her twin sister, Hazel, who does not. Saffron, the detective whose dogged determination sees her haunted by Ansel, is a wonderfully inspiring, real character.

What really sets this book apart for me (and interested me enormously), aside from the women-centric plot, was the inclusion of the quantum theory. Specifically, the notion of a multiverse. Ansel Packer is exploring a theory of good and evil via his personal writings. He talks about “the concept of choice” and alternate universes in which we’ve made different decisions. It’s fascinating! I imagine it’s also a great source of comfort to a man facing his own mortality, imagining other lives where he isn’t a monster. He firmly believes in the “eternal possibility” presented by the multiverse. Ultimately, I think he’s trying to find a way out; a means of absolution for himself and the rotten choices he has made.

Something I particularly appreciated about ‘Notes on an Execution’ is the clear assertion that men who hurt (and kill) the women they think they love do it because they want to. Our eternal search for meaning, and justification, is pointless. They do it because they can. And they will employ every excuse in the book to justify it to themselves and deflect blame. It’s a tale as old as time, told in an innovative way and resulting in an extraordinary piece of work.

Danya Kukafka is the author of international bestseller “Girl in Snow”. “Notes on an Execution” is her second novel.