The Fortify Education Foundation (FEF) launched its School Meal Programme in Karachi in February 2020. It is now providing free meals to about 515 children in underprivileged schools. 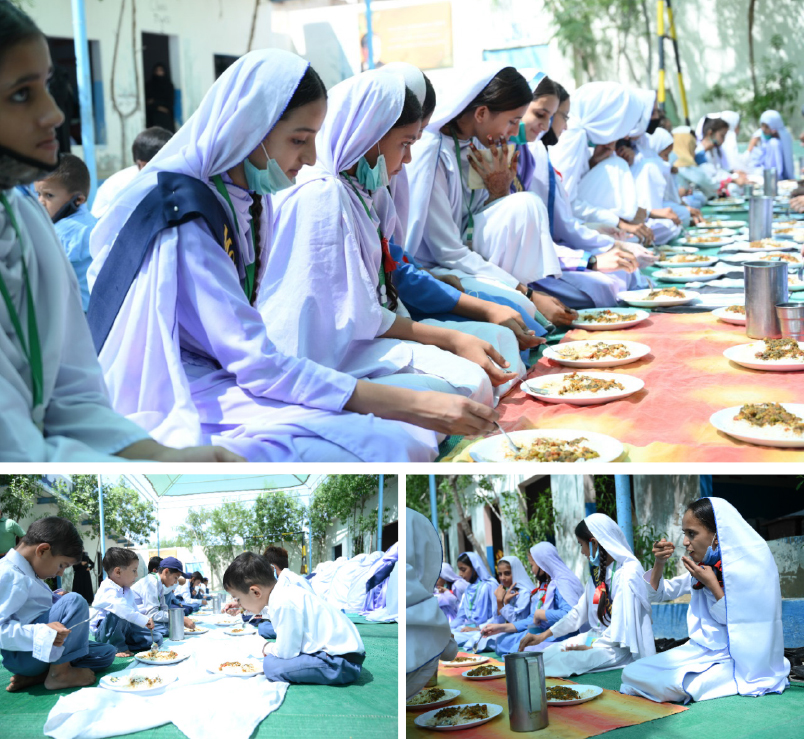 If you had all the money in the world or had very little, but still you wanted to invest in a worthwhile cause, where should you start?

I would invest in children; I would provide them the means to learn, to grow mentally and physically, and to enable them to protect their own and their family’s future.

In Pakistan, about 34% of our children are under the age of 15. They are the future, but are they strong? No, they are not. Is their future secure? No, it is not.

In a study carried out by the World Food Programme (WFP) and the Government of Pakistan (GOP), Pakistan is one of the countries with the highest rate of malnutrition and undernourishment. Another study of the nutritional status of children of 5-15 years of age in urban slums, says about 38.3% children are suffering from stunting problems, 28.5% wasting away from hunger, and around 17.5% are simply underweight.

Research has clearly shown that nutritional status can directly affect mental capacity among school-aged children, inhibiting their cognitive abilities and mental concentration. There are also studies showing that improvements in nutrition levels can influence the intelligence levels of school-aged children. Therefore, proper nutrition is not only critical to children’s health and well-being, it has a very positive impact on children’s learning too.

At the Fortify Education Foundation (FEF), we have set out to combat the menace of malnutrition in Pakistan. Through our School Meal Programme (SMP), we feed the children who are in school to learn and achieve but are affected due to hunger. We provide them the nourishment and motivation they need to pursue an education to secure their future.

“A journey of a thousand miles begins with a single step,” says a Chinese proverb. In a similar vein, the Fortify Education Foundation (FEF) began its journey in February 2020, by starting its School Meal Programme at a school in Orangi Town in Karachi, where around 260 children come to study. Orangi Town was the most suitable place to launch the FEF initiative since Orangi is the world’s largest slum where the population is severely disadvantaged, both in terms of their income levels and their living conditions.

The FEF volunteers began the meal preparation in a makeshift kitchen, set up in a corner of the school administrator’s house next door to the school. The intent was to build a properly built kitchen at a later day, which would cater to not only this school but would have the capacity to service other schools in the vicinity. We had avowed to spread the network of the SMP initiative as soon as we had the financial ability to do so – “Today Orangi, tomorrow the entire country” was the call.

Orangi Town was the most suitable place to launch the FEF initiative since Orangi is the world’s largest slum.

At the same time, we applied for the registration of the Fortify Education Foundation (FEF) as a not-for-profit organization under the Societies Registration Act, XXI of 1860. The registration was accorded in September 2020.

The good news was that soon after we started our programme the enrolment in the school started to rise. We had anticipated this, but weren’t sure if this would actually happen. It happened. After getting a little settled in the operation of the kitchen, we approached the Education Department of the Sindh government with an offer to start our program in the government schools operating in the vicinity of our kitchen. They agreed. In September 2021, we started serving on the Medina Government Primary School and then in November 2021 added the Government Boys Primary School Qamar, Orangi to our network. Both these schools saw an increase in their attendance after we had started our programme. This was again heartening.

We are so grateful to Allah that we are now able to provide nutrition to about 515 children in these underprivileged schools.

The writer is a corporate leader and marketing practitioner. He can be reached at mnanji@hotmail.com