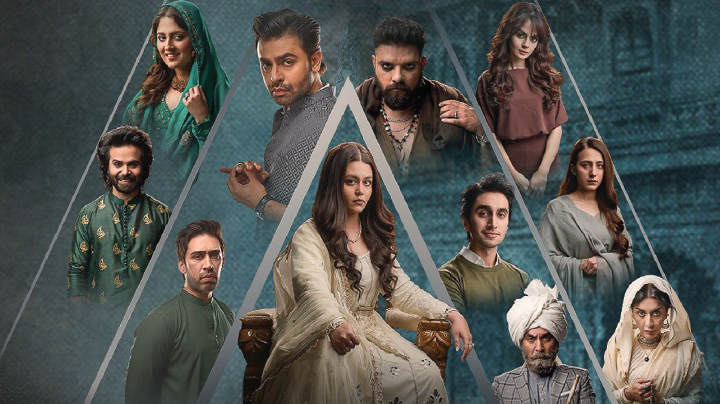 The realities of the influential families of Sindh are depicted in the play Badshah Begum. Saman Ansari plays the role of the manipulative Hakim Bi. She is responsible for looking after the throne until a successor is found. However, she wants to remain in power and become the permanent possessor of the throne and the title of Badshah Begum. Hakim Bi is the sister of Pir Shah Alam (Shahzad Nawaaz), who is the leader of Piran Pura. Saji Gul has written meaningful lines while Khizer Idress has directed the drama. It runs on HUM TV.

The story of Badshah Begum is dark and requires the cast members to understand that it must remain within character while being linked with the Wadera lifestyle as depicted. Zara Noor Abbas plays Jahan Ara, daughter of Pir Shah Alam. She is the mature one as compared to her sister, Roshan Ara, played by Komal Meer.

Farhan Saeed as Pir Shahzaib, the son of Pir Shah Alam, is heir to the throne of Piran Pura.

Ali Rehman Khan as Bakhtiar, Yasir Hussain as Pir Qaiser, Hamza Sohail as Pir Shahmeer and Abul Hassan as Murad (Hakim Bi’s son) have played roles that they connect with, thereby creating an aura of realism.

Komal Mir and Ali Rehman Khan are seen partying late at night at a club – showing they are closely related and enjoy the life of the elite. However, little does Roshan Ara know that Bakhtiar (Ali Rehman Khan) is more interested in Jahan Ara (Zara Noor Abbas). How will Roshan Ara accept this disclosure and will Jahan Ara accept such a circumstance? Roshan Ara is arrogant while Jahan Ara takes calculated steps and keeps herself composed. Daughters of Pir Shah Alam, Roshan and Jahan Ara are living in the city and are not too familiar with the customs of their native region. It is Pir Shah Alam’s wish to keep it this way.

The story of Badshah Begum presents the hidden and often unknown realities of the Pirs settled in the rural areas. It shows how they struggle to develop, maintain, and implement their influence and power in the region and over their people. The fight is for power and with it to claim their right over the ‘gaddi’. The story also shows how the Pirs exercise their rules and command over the common man even if it means asserting their will whenever they can.

Pir Shahzaib (Farhan Saeed) takes care of the matters in the village for Pir Shah Alam while Shahzaib and Murad are Pir Shah Alam’s sons – however, from a different wife. Murad is the odd one among the family who knows the abuse and intoxication of power that runs around him. Kaiser (Yasir Hussain) and Shahzaib (Farhan Saeed) are struggling to bring their conflict to a resolution. Will they ever conclude?

Farhan Saeed must be applauded for his role as Pir Shahzaib. He has already appeared in too many drama serials, playing a happy-go-lucky teenager. As Pir Shahzaib, he is seen as mature, in control of his emotions, and exercising his assertiveness where it is required.

The political and social fabric of Piran Pura and how the Pirs use their power to control the area’s resources and its people, keep the story moving. The powerful performances, line delivery and direction combine to make a drama serial that people will remember.