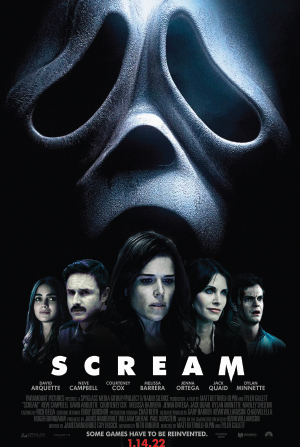 ‘Scream 2022’ is an American horror and thriller. With an imdb rating of 7.3/10, the film evokes plenty of excitement and keeps suspense in the audience till the last minute.

Directed by Matt Bettinelli and Tylor Gillett, ‘Scream 2022’ is fifth in the series of the Scream films and is a sequel to Scream 4.

Some 25 years after Billy Loomis terrorized the town of Woodsboro, a new Ghostface emerges. The film opens with Tara (Jena Ortega), a high-schooler being stabbed several times. Although she survives the attack yet the killer is still on the loose, hence breeding fear in the gang of friends.

In the opening scene, the killer asks Tara questions, the answers to which she must not get wrong. Wrong answers are the pathway to murder! The scene creates a ripple of fear in the viewer’s heart, causing it to thump wildly as to what will happen next.

Sam Carpenter (Melissa Barrera) is Tara’s older sister. She is soon informed of the assault on Tara by Wes and with her boyfriend Richi (Jack Quaid), immediately leaves for Woodsboro, where she is reunited with Tara’s friends, Amber Freeman (Mikey Madison), the twins Chad and Mindy, Martin and Liv Mackenzie.

As Sam seeks Dewye’s help to seek protection from the crazy murderer, he lays own three rules which are the key to solving the murder mystery. One of the rules is that the killer’s motif is connected to the past. Sam has a dark past and as she unburdens herself by telling Tara the secret that drove her from Woodsboro in the beginning, she is not alone in carrying the secret and she might finally be free. What the secret is, I will not reveal as it will spoil the thrill of watching the film.

Scream 5 hit the screens after a gap of 11 years. Although the original cast of Courteney Cox (Gale), Neve Campbell (Sydney) and David Arquette (Dewey) will never lose their charm, but the new cast is also energetic and surprisingly likeable.

As Sydney, Gale and Dewey return again to uncover who is behind the mask, they together embark on a journey that is dangerous and can cost them their lives. They break the rules that define horror movies and clichés whilst knowing all the while that someone close is the killer!

The second rule as Dewey puts it is ‘never trust the love interest.’ Is that really true? Does that make Richi a probable suspect? To find out, watch the film!

The third rule is the most important. It is that the first victim always has a friends group that the killer is part of. Does Tara’s relationship to Sam and Richi meet this criterion?

So, who really is the killer? There is not one killer but two! The film takes the audience through wild twists and turns, making it consider several suspects before finally revealing the identity of the killer. Scream 2022 no doubt doesn’t fail to surprise the viewer as it literally catches the viewer off guard in the final moments of the film in particular, where the question of ‘who is behind the mask?’ is finally unveiled!

If you are a hardcore fan of horror films, you will definitely love the film. Packed with gruesome and ghastly scenes, the indifference with which the stabber kills his targets sends a chill down the viewer’s spine. The macabre image of thick red blood spurting out portrays a sanguinary violence that genuinely incites horrors.

Then is Scream fun to watch? Yes, it is! So go out, spend some cash and buy popcorn before you reel out on the journey to try and play ‘guess the killer?’
As New York Times puts it in a nutshell the quintessence of all the Scream movies:

‘They Screamed, We screamed. Now they are in Scream again.’

To conclude, Scream 2022 is a good film for all horror movie lovers