On the Ukrainian front, Russian President Vladimir Putin is diplomatically trapping the United States and Europe to grapple against each other to decide on a reactive stance. Doing this, Putin is playing a much more sophisticated and intricate game - more than what meets the eye. 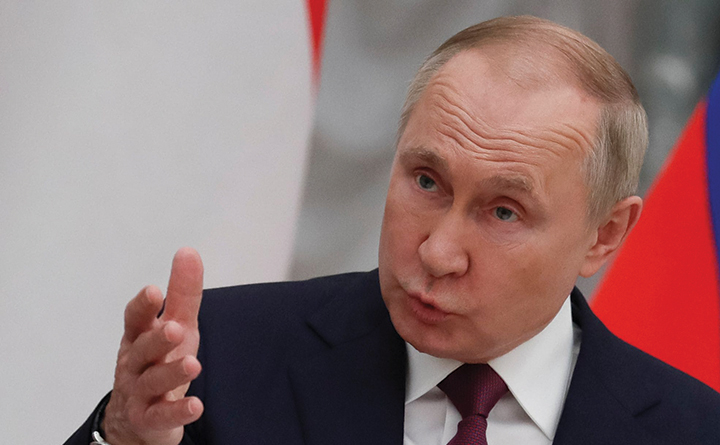 “George, you have to understand that Ukraine is not even a country. Part of its territory is in Eastern Europe [and] the greater part was given to us.” These words are straight out of the mouth of Russian President Vladimir V. Putin - addressing former US President George W. Bush at the 20th NATO Summit. He mentality regarding Ukraine is quite patent: part of the Russian motherland that got unfairly dismembered by the NATO alliance in the 90s.

As a self-proclaimed savior of the Soviet legacy, he hardly regards the former Soviet members as independent countries. Hence, the fears of Ukraine are grounded in Russian capabilities and the vulnerabilities of the West – highlighted throughout history.

Putin has often regarded the breakup of the Soviet Union as “the greatest geopolitical catastrophe” of the 20th century. And over the past decade, he has managed to ground the domestic opposition, disregard international scrutiny, and squeeze general liberties in the name of defending the pseudo-Russian legitimacy. His aspirations range from pushing the US out of Europe to denying NATO membership to ex-Soviet nations to spreading his scope of influence across borders. The current military built-up has one definitive agenda: negotiate a new Cold War order or prepare for a Post-Cold War confrontation.

While there are some legitimate security concerns, Russia has apparently denied any intent of an invasion. However, political experts believe that a possible Russian incursion could follow after the 2022 Winter Olympics in Beijing. Thus, the timeline roughly suggests that a conflict could ensue by late February. About a third of the Russian army is currently lining the Ukrainian borders, while Ukrainian forces are preparing to tackle any aggression to the best of their abilities. Despite that, Ukrainian forces are majorly insufficient to deter any Russian invasion.

While I admit that the Ukrainian forces have since improved, Russia still has a quantitative and experiential advantage over Ukraine - even with the US and European assistance.

The first shipment of the US security support package to Ukraine - amounting to an estimated $200 million - recently arrived in Kyiv. Moreover, the NATO allies have assured preparedness, the Baltic nations - including Estonia, Lithuania, and Latvia - are reportedly established as the base for reinforcements - including anti-tank and anti-aircraft missiles.

While diplomacy is underway to avoid an armed conflict, neither Russia nor the US seems prepared to abandon their positions. The US wants to save face and stand firm against Russian autocracy. Meanwhile, Putin wants the US influence uprooted from Europe, NATO expansion rescinded from the Russian borders, and nuclear weapons expelled from the former Warsaw nations. The Ukrainian strife is basically a stepping stone to strong-arm the US influence over the ex-Soviet nations and instead spread Russian ideology that is steadily waning away. Therefore, an active invasion is a legitimate threat.

The Ukrainian President, Volodymyr Zelensky, recently stated that Russia could incite an insurgency in a Russian-centric area of Ukraine and then invade using the pretext of protecting the Russian-speaking population. This sentiment is eerily echoed by many senior analysts as an estimated 8 million people - out of the 43 million Ukrainian population - are ethnic Russians.

According to some experts, Kharkiv - the northeastern Ukrainian city of more than 1.5 million people - could be the focal point of the Russian invasion. The city is merely 25 miles away from the Russian border. And with a large Russian-speaking population and cultural similarities, it is an obvious target in case of an invasion. The annexation of Crimea is the prime example of how an incursion could be feasible for the Russian army. Plus, under the hoax of protecting Russian identity, Putin could establish a reason to further drill into Ukraine.

Another move could be to mobilize the rebels in the Donbas region. In line with his denial of preparing for an invasion, Putin could instead recognize the independence of Donbas from Ukraine - fuelling anger in Kyiv and ultimately sparking a civil revolt in Donetsk and Luhansk. During the Crimean annexation, Putin notoriously supplied artillery and ammunition support to the East-Ukrainian rebels while blatantly denying any involvement in the bloodied conflict that stretched for years after the annexation.

Therefore, it is probable that a similar scenario repeats - laying a clear passage for Russia to invade either from north or south while limited Ukrainian resources struggle against the insurgency in the east. The reverse is also possible: Russia forging a bridge between the Crimean peninsula and Russian territory. While the Ukrainian forces would attempt to dispel the invaders in the south, the rebels in the east could detach Donbas with Russian assistance - all under the pretense of a rebellious uprising.

Even the Ukrainian capital is under threat at this point. With Russian troops moving into Belarus (to the north of Ukraine) under a facade of war games, the potential invading troops are barely 100 miles away from Kyiv. A manufactured coup could overthrow the government of Zelensky in the guise of revolt against economic disparity or lukewarm governance. In fact, Zelensky has repeatedly warned that Putin aims to install a pro-Russian leader in Kyiv to reverse their inclination towards the West and establish his communist ideology. Belarus is a vital example of a pro-Russian leader rigging elections and crushing opposition: all to satiate Putin in the name of financial support and political restructuring. It is no doubt then that a similar scheme could lay a passage for Russia to conquer Ukraine without even fighting a war.

In my opinion, an invasion is a possibility but doesn’t have plausibility. Focusing on the broader picture, Putin is playing a much more sophisticated and intricate game - more than what meets the eye. Putin has established a blended strategy implemented through cross-domain coercion: clashing on multiple planes of influence. He is diplomatically trapping the United States and Europe to grapple against each other to decide on a reactive stance.

While the US is convinced to impose sweeping financial restrictions to damage the entire Russian economy, Europe stands between a rock and a hard place. Countries with heavy dependence on Russian energy supplies - including Germany and the UK - seek exemptions for the Russian energy sector. They want to avoid disruptions in the energy supply or transactions that could harm their economy. The reason is simple: amid surging inflation and vulnerable economic stability, the European countries couldn’t afford to rattle Russia - the primary energy provider and trade partner of Europe.

Militarily, Putin has managed to unnerve even the United States with subtle threats of installing nuclear arms in Cuba - resonating the Caribbean Crisis of the 60s. President Biden backtracked on his commitment to defend Ukraine and denied an active military intervention even if Russia invades Ukraine. He further stated that a ‘minor incursion’ would not warrant a barrage of crippling sanctions. Biden is privy to the repercussions of large-scale damage to the Russian economy. It could have severe ripple effects in Europe and even across the Atlantic; the spillover effects could financially devastate the general Russian population – indirectly adding weight to the anti-American narrative of Putin. Thus, Putin has seemingly already succeeded in pushing the right buttons.

Putin knows that Europe is reeling from searing inflationary pressures and post-Brexit fiasco. And he knows that many NATO allies are directly - or indirectly - connected to the Russian economy.
The most probable outcome to this heated impasse is a diplomatic breakthrough - even if it hardly seems workable at this point.

As for the future course of action, NATO would be deciding how to counter these multilateral schemes of Putin while diversifying heavy dependence (of some countries) on Russian resources to make acerbic decisions in the future. The reality is that Putin is here to stay, and his plans go far beyond merely invading a country on pure instinct. Instead, he aims to derive the US from his scope of influence while enveloping Europe in the Soviet ideology that consolidates his legacy in Russian history forever.