Inside the Housewife’s Mind 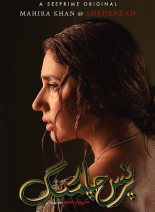 This work of absolute art is an original short story which carries out a deep exegesis into the emotionally-sterilized world of Sheherzade, as she splits her time between her husband, her daughter and her lover.

The film is a comment on post-marital depression that places significance upon the abstractions that women are affiliated with: how their feelings of pain, suffering and trauma are labelled as valueless emotions and not taken seriously. All that Sheherzade wants is a lively connection with her husband, who apparently did not turn out to be the proverbial “Prince Charming” she thought she would get after her marriage.

The short film explores the highs and lows that a housewife’s mind could ascend and descend to in response to the bland, tiring and underappreciated stimuli that it receives from life at home- an issue that is hugely unaddressed. Mahira Khan’s intense expressions of depravity perfectly complement the contrasting indifference from Zahid Ahmed’s end, and the duo has done a great job at convincingly playing their roles.

Contemporarily, the short film is much talked about in the literary circle as well. The film has also been juxtaposed with Charlotte Perkins’ short story “The Yellow Wallpaper” in terms of sharing themes of post-marital hysteria and depression among women, wherein common “women diseases” of the 19th century were deliberated through a story that set in motion, according to Paula A. Triechler, “a therapeutic regimen by using language in several ways.”

Prince Charming is synonymous to a vehicle of articulation for the women of the 19th century who couldn’t voice themselves then, just as well as it is for the women of the 21st century who remain muzzled today. Sheherzade, an aesthetically-sound person with a love for colours and liveliness, indulges in fanciful imagination in which she carves out a lover, an imaginary Prince Charming, for herself.

Sheherzade’s love-deprived life is illustrated through her fragmented consciousness and a vivid display of her anxieties. The notion that Sheherzade yearns to be playful around a lover, who treats her with a taste of romance, is indicative of her need to be appreciated, loved and wanted. The round-the-clock services that she offers as a wife and a mother have seemingly taken away from her the individuality that she now hungers. This, put together with the indifference and coldness from her husband’s end, is also the reason why she has been shown to imbibe the languidly fretful atmosphere of the house that itself appears rickety and devoid of warmth.

All emotions showcased by Sheherzade portray a secluded, scared woman as she continues to be treated as a separate, peripheral entity, bordered, marginalized and cut off from the rest of the world, living in captivity. Her broken thoughts also identify the idea that there is a lot to be said from her side, but there is none who could offer a listening ear to her. Hence, to channel her thoughts, she takes up this way of articulation: creating an imaginary lover that she feels she is cheating upon her husband with.

The Prince Charming fancied by Sheherzade, is the recreated version of her own husband, with the same face and voice, but with a softer, sweeter attitude towards her. This idea also throws light at how Sheherzade is barred from thinking about a man in the image of anyone other than her husband. Even in her imagination, she is stuck with the same man, but since imagination is all that she has, she allows herself to rebuild the character of her husband by fashioning a Prince Charming out of him.

The short film is a beautiful and thought-provoking rendition of how stay-at-home mothers, and homemakers/housewives who constitute a large segment of our social calendar, are barely paid any attention to. Not only are they unpaid workers, but are also extremely underappreciated for their work and are forced to suppress even the most humblest of their desires and passions.

This harrowing experience is the reality of many women from not just the underprivileged class, but also the middle to upper middle-class echelons of society. The film serves a treat to binge-watchers and art-film enthusiasts.

One thought on “Prince Charming”