There is a strong likelihood that the so-called ‘Mehngai March’ will just be a game of power show and the PDM parties will make every effort to remain politically relevant. 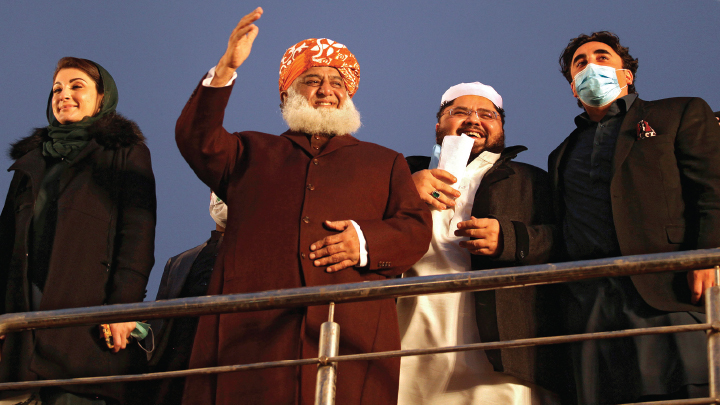 Maulana Fazlur Rahman, the president of Pakistan Democratic Movement (PDM) and Jamiat Ulema-i-Islam (F) chief, has announced a march towards Islamabad against the government of Pakistan Tehreek-e-Insaf (PTI) on March 23rd, a day when Pakistan day is celebrated across the country. Maulana Fazlur Rahman has named it as ‘Mehngai March,’ which will be taken against increasing inflation and skyrocketing price hike in various essential commodities. Although it is the right of every citizen and social or political organization to record its protest, the PDM leaders realise the fact that their movement will have the least possible impact on the incumbent PTI government other than merely causing mental anguish to the people.

The PDM is a hodgepodge of political parties with a long-standing prevalence of mutual distrust. Thus, there is a strong likelihood that this so-called ‘Mehngai March’ will just be a game of power show and the PDM parties will make every effort to remain politically relevant, and nothing more than that.

A makeshift combination of different political parties pursuing a different approach and inclination, the PDM can be referred to as a political marriage of convenience in which none of the side is willing to lose anything in the pursuit of more political ends and advantages, using the facade of being a part of an anti-government movement and portraying itself as the ‘real opposition’, which is not the case. In fact, all of them are eyeing forthcoming local bodies polls and general elections.

Maulana Fazlur Rahman-led JUI could not make significant gains in the last general election to the extent that Maulana himself lost his seat from his hometown. Therefore, they have an insignificant presence in the parliament. When the PTI government assumed power in August 2018, the JUI was ardently pursuing to overthrow the PTI government from the word go. Maulana Fazlur Rahman tried to convince his political partners to resort to the extremes of toppling the government by blocking the capital Islamabad. At that juncture, however, his other allies were least interested in his adventurous proposition.

After that moment, Maulana wanted all the Opposition parties to resign from the legislature in one go and he is still in favour of taking extreme measures to get rid of the PTI government, led by Imran Khan. A collective resignation from the parliament will consequently compel the government to hold fresh elections because holding by-polls in all vacant constituencies will not be feasible. Logically, if the PDM is really interested in getting rid of the existing regime then its members must resign at a stroke, but anything less than collective resignation is merely an eyewash, no more, no less. However, the rest of the PDM-allies are not willing to do so since they do not want to indulge in political brinkmanship at the cost of suffering more losses than making gains.


For instance, the Pakistan Muslim League - Nawaz (PML-N) is the second largest party in the parliament, and its president Shehbaz Sharif is the Opposition leader in the lower house of the parliament. On the face of it, the PML-N is divided into two camps. The pro-Nawaz camp, led by Maryam Nawaz Sharif, disagrees with the party president and uncle Mian Shehbaz Sharif, as she wants to take the resignation route.

Shehbaz Sharif camp, on the other hand, believes resignations from the assemblies will be quite a dangerous move tantamount to offending the establishment. As the PTI government enjoys the support of the powers that be, the Opposition parties after the suicidal resignations will be further pushed to the wall. The ensuing political instability resulting from that action will take a toll on democratic dispensation, and could even invite the wrath of undemocratic forces always up to partake in sabotaging the democratic process. In other words, if the Opposition could not get the chance to form government in 2018, it can do so in the next general elections, as long as the democracy remains intact. Politically speaking, Shehbaz Sharif is a sagacious and accommodating politician who understands the ground realities well and is able to maintain good ties with the establishment as their support will always be of paramount importance.

The Pakistan Peoples Party (PPP) shares the same stance as Shehbaz Sharif since the PPP has been governing the Sindh province for a third consecutive term and in the last general elections, it got more seats than 2013 elections. Also, the PPP currently enjoys a significant presence both in the National Assembly and the Senate.

It is worth mentioning here that only those political parties that have an insignificant presence in the parliament are in favour of resignations, while the parties with a decisive strength in the legislative assembly disagree with this viewpoint.

Such deep internal divisions cobbled together to launch an anti-government movement are just playing politics, and nothing else.

Hence, the much-hyped Mehngai March is nothing more than a political stunt, which is bound to fail.

This writer is a freelance contributor. He is pursuing MBA from the University of Strathclyde in Glasgow, Scotland and can be reached at amjadsiyal@hotmail.com