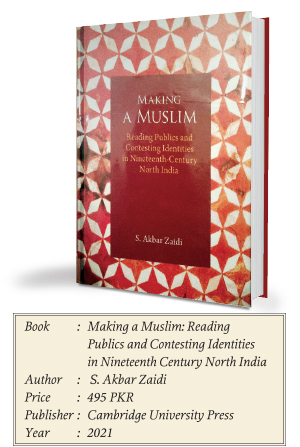 Akbar Zaidi follows up his edited volume New Perspectives on Pakistan’s Economy with this erudite and engaging scholarly monograph on the role played by print and orality in helping to shape Muslim subcontinental identity in nineteenth century India, especially during the Raj. The superb, rather exciting, preface reminds me of the excellent opening scenes of James Bond’s No Time to Die; unlike dry, scholarly forewords it describes the author’s arduous journey from AERC political economist to Cambridge trained historian and doctorate holder.

The starting point oddly enough was the imperious manner in which a former prime minister sacked an AWOL manager, but Zaidi’s pathway towards acquiring a prestigious degree in history was far from imperious or frivolous. Committed almost to the point of academic fanaticism, Akbar Zaidi worked diligently under the eagle eye of notable British academic Christopher Bayly, until he triumphed over unsubtle academic odds (such as an unusually tough PhD defense). It is rare for an academic to be undaunted in the face of supercilious, but acerbic, criticism but there were plenty who encouraged him to follow his bliss including a number of very fine established scholars, such as Janaki Bakhle.

In spite of being rather major in his field, Zaidi demonstrates a touching and sincere egalitarianism whereby he credits junior scholars and even talented IBA students of academic and moral integrity such as Ilsa Razzak for their help when it came to looking over his manuscript. The volume is dedicated, in a dignified manner, to his late wife and he also gracefully acknowledges his father’s help when it comes to an outsider’s appreciation of his writing.

Fortunately, unlike the recent James Bond flick which went completely downhill after its sublime initial ten minutes, Zaidi’s book maintains its pace and deftly underscores the valuable research that went into the creation of his arguments.

Although some might think that a detailed Introduction in addition to a substantial Preface is a very long run-up to the wicket, it makes perfect sense since the Introduction posits (as indeed, does the Conclusion) that Indian Muslim identity was far from homogenous during the nineteenth century (for e.g. Zaidi does a very fine job of delineating what the Barelvi and the Wahabi schools, among others, respectively entailed).

The ashraf or elites of the country hearkened back to the glory days, not just of the Mughal Empire, but also the point at which Islamic culture, centuries before the Raj, was at its peak. This was a way of combating zillat (humiliation, loss, deprivation of potency and control) that Muslims were suffering from while under the weight of British oppression.

Although the back cover purports to deemphasize the colonial narrative, I found some striking parallels between the manner in which diverse key figures of this period ranging from the great Aligarh scholar Saiyid Ahmed Khan to a Christian named Father Knowles would use print and/or orality in order to further their specific agendas and the way in which the Augustan school of Dryden and Pope would spar intellectually with each other.

Zaidi recounts some remarkable snippets of biographical interest, such as that involving the informed and inspired writings of the Shia writer Ulfat Hussain, and dwells in no small measure on the great Agra munazara (oral declamations) of the mid 1800s and the exciting ones at Chandapura couple of decades later.

He draws on umpteen print sources ranging from Urdu biographies, tracts and treatises to the journal Oudh Punch in order to buttress an overarching thesis that is any day as solid as that of a critic like Ayesha Jalal (perhaps more so since Zaidi points out on more than one occasion where she has erred). In aggregate, the book is an excellent if thoroughly demanding read.