There is a dire need to have a domestic political stability and sanity in the country in place of pursuing a self-serving political agenda. The enemy is on the watch and an obvious repercussion of a destabilized political environment could emerge in the form of more terrorist attacks, sponsored by New Delhi and international powerhouses. 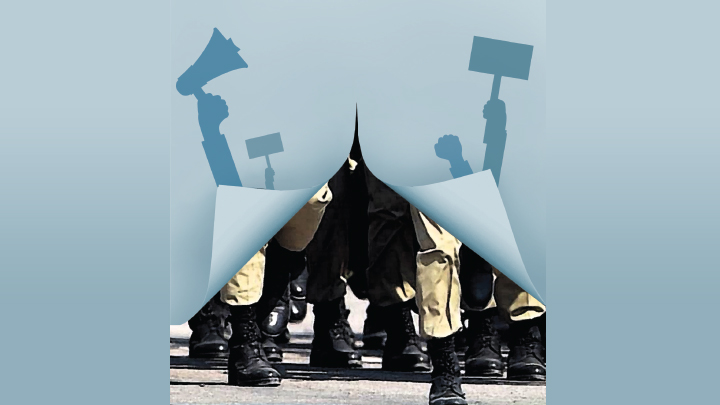 No governance system in the world is better than democracy in which people set rules for themselves and a consensual-based society is formed to embark on a prosperous path. However, the democracy in Pakistan has had a chequered record as out of almost 75 years of the country’s existence, it has put disparate government systems to the test, including parliamentary and presidential democracy, military dictatorship or martial law. Playing around with different forms of government, the vulnerable security situation of Pakistan is often cited as the perceived reason for the country because of its geostrategic position, confronting myriads of security threats and challenges. Along its Eastern border, India has been in its perpetual enmity with Pakistan due to the long-festering Kashmir dispute. Along the western borders, the presence of Afghanistan and Iran poses continuous security challenges to Pakistan. Afghanistan, which has been in a shambles for many decades because of intermittent war imposed by global powers, has had severe effects on Pakistan too, dragging it into war without its consent. Iran has also been using Pakistani soil for its proxies against Saudi Arabia.

Such threats as mentioned above have virtually kept Islamabad increasingly engaged in mitigating the security challenges confronting the country at the cost of putting its much-needed economic growth on the back burner. For their strategic interests, international powers have been asserting their political influence coupled with economic affluence to install their chosen people in the government in Pakistan to advance their hidden agenda. There have been reports that foreign powers have been funnelling money into Pakistan’s political parties and their associated entities to bring them at the helm. Different political parties, thus, have been calling each other ‘traitors’ and security risks. Even honourable Māder-e-Millat Fatima Jinnah, the younger sister of Muhammad Ali Jinnah, was once labelled as a traitor.
With an uneven political climate ever since its independence, Pakistan is one those countries where democracy has not been able to have a field day. For instance, none of the democratically elected governments in Pakistan finished their 5-year term, except the last two regimes of the Pakistan Peoples Party (PPP) and the Pakistan Muslim League- Nawaz (PML-N).

In Pakistan, yet another democratically chosen government, namely the Pakistan Tehreek-e-Insaf (PTI) led by cricketer turned politician Imran Khan, is under threat of getting derailed. In 2018, the PTI came to power with much fanfare and Imran Khan, who was the most popular celebrity widely known for his charity work and for his presumed honesty, has miserably failed to deliver, despite his tall claims and quixotic promises to the people. Prime Minister Imran Khan, often referred to as a ‘Selected Prime Minister’ by the Opposition, comprising the PPP, the PML-N and the JUI-F (Jamiat Ulema-e-Islam-Fazl), was not welcomed to the country’s premiership. From day one, the Opposition parties were sceptical about Imran Khan’s commitment to putting the corrupt politicians behind bars to recover the ill-gotten money they had earned and stashed in their foreign bank accounts.


To fulfil his anti-corruption promises, PM Imran Khan activated the National Accountability Bureau, but all his efforts went in vain. Since bad luck never comes alone, Imran had to grapple with the unprecedented Covid-19 pandemic, which severely impacted upon the already fragile economic situation of the country, resulting in uncontrolled inflation and thus making the life of the poor and the middle-class people miserable. To keep the economy afloat, Imran had to resort to the IMF. Aimed at bailing the country out of an impending debt default situation, the IMF’s stringent policy conditions to the borrowed money worsened the gloomy socio-economic outlook, preventing the PTI government from mitigating the unbridled effects of inflation and providing any relief to the masses. The inflation led to a decline in Imran Khan’s popularity and even his staunch supporters and PTI parliamentarians started blaming him for his poor show of governance.

Adding insult to the injury, the US-led forces left Afghanistan in haste in August 2021, leaving the war-torn country in a muddle. Post the hasty withdrawal of the US forces from Afghanistan and the ensuing rise of the Taliban to the power, the US wanted to establish its military bases in Pakistan for future operations in Afghanistan, but Imran Khan’s “Absolutely Not” stance made the US furious and gave the impression that his government was not supportive to the international establishment. Also, the unforeseen tension between the military echelons and PM Imran Khan over the nomination of the ISI head made things worse for Imran Khan.

In addition to that, Imran Khan’s uncompromising attitude and the lukewarm relations with the international and domestic powers that be, helped the Opposition to join their hands to oust the PTI government through the vote of no confidence or by launching the long march on March 23rd, 2022 – Pakistan’s National Day. The move seems to be justified, however, the day chosen for that purpose doesn’t augur well. On March 23 every year, the Pakistan Day Parade, also known as the National Day Joint Services Parade, is held to commemorate the Lahore Resolution, which was adopted on the same day. The Pakistan Day parade is an event of immense national importance and is participated by the delegations of foreign troops as well as the diplomatic community based in Islamabad.

An effort to sabotage or undermine the event by staging a political march will not be allowed by the Armed Forces. Being cognizant of this reality, the Opposition seems hell-bent on staging the long march on the same day in a rare show of power to exert pressure on the military establishment to step aside from supporting the PTI government. On the contrary, DG ISPR has reiterated multiple times that the Pakistan Armed Forces will remain loyal to the incumbent government which may belong to any political party. He also firmly urged to stop dragging the Armed Forces into politics. Unfortunately, the opposition parties are not on the same page and the people, by and large, have also lost their interest in the scheduled march, which they deem is just a tool for exerting political pressure on Imran Khan’s government to fend off corruption cases against the big fish.

There is a dire need to have political stability and sanity in the country in place of pursuing a self-serving political agenda. The enemy is on the watch and an obvious repercussion of a destabilized political environment could emerge in the form of more terror attacks sponsored by New Delhi and international powerhouses. Being a nuclear power, Pakistan cannot afford to be labelled as an irresponsible and destabilized state.

Staging a long march to nowhere, the Opposition needs to think beyond short-term political gains. The general elections are not far away. Let the people decide about their political destiny through peaceful, fair and free elections not agitation. The PTI government also needs to show some political maturity as the general people are weary of listening to the oft-repeated anti-corruption rhetoric. The government must rise to the occasion by shifting its focus on people’s well-being only and it should stop blaming others for its own failure.

Prof. Dr. Ahmed Saeed Minhas is Pro-Vice-Chancellor and faculty member at DHA Suffa University in Karachi. He is an expert in strategic and security issues and frequently writes for international and local journals, magazines, and newspapers. He can be reached at ahmedsaeedminhas81@dsu.edu.pk