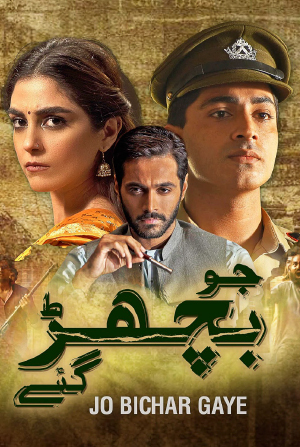 The drama serial ‘Jo Bichar Gaye’ currently showing on Geo TV channel is adapted from a biographical novel and popularised as a historical series based on events in Dhaka, from late 1970 to December 1971. Until the time this review is being written, nine episodes have been aired.

For authenticity of ambiance, slickness of production and good acting, this serial is a marked departure from the pervasively artificial and gaudy soaps churned out by Pakistani channels. The darkness of rooms and alleyways, the quiet spoken word sans background music and the general simplicity, nay, dilapidation of buildings depict a near natural picture of cities in the erstwhile East Pakistan in those days. The design and production teams deserve praise for their research as do most actors for their underplayed but nonetheless passionate roles: Wahaj Ali impresses as the angry young man driven by his passion for a national identity. Others are well suited for their roles.

Narrating the events of days and hours in the lives of the main characters, the story captures the political turmoil followed by mass resistance by the majority of Bengalis, as the fateful day of March 25 approaches, when Operation Searchlight was launched by the military regime led by Gen. Yahya Khan. The serial would be a fair depiction of personal experiences of various characters had it not been for interpretations and analyses presented as sole facts.

Actions of politicians of West Pakistan and the Army are justified as being the only wise options available: Yahya and Bhutto are portrayed as loyal to the country: their inability or unwillingness to assess the real situation and accept the will of East Pakistani Bengalis in the 1970 elections are completely glossed over, while Mujib and his followers are obvious (and easy) traitors. The former is shown to be rather weak and unable to control the wave of violence he has unleashed, especially among students and Bengali military officers.

Viewers in truncated Pakistan, watching the drama today, and not having links with Bengal, or read widely of the happenings, would surely place the entire blame upon the Bengali population being unjustly paranoid and sceptical of West Pakistan. The latter robbed them of their rightful resources and treated them as inferior beings- these sentiments are expounded by a Hindu professor of the Dhaka University who comes through as a caricature of a Bengali intellectual (and is actually a RAW agent). When a character is instantly unlikeable, what he says also gets rejected as false, never mind that others too echo the same feelings.

The serial repeats the monochrome state narratives of the 70s. Against factual versions of post Cyclone Bhola, when the federal government was criminally slow and unresponsive to the needs of the dying and displaced Bengalis, the drama suggests that all that was necessary was done. Indeed, the first nine episodes seem to paint a picture of clean and pure intentions of military officers and politicians from West Pakistan and dark and polluted betrayals of Bengalis, wherever they might be. The emotional and passionate Shafi alias Rumi is the rare Bengali who finds out too late that his ideals were merely dreams which he was misled into believing.

Linguistic and cultural errors jar upon nerves. If all speak in chaste Urdu to each other (which in real life they would not), there is no sense in mimicking a Bengali accent. Also, it is only recently that the word “wait” is used instead of the Urdu “intezaar”; the writers perhaps did not know that Dhaka was Dacca then and that Bengali girls did not wear trousers to university and did not walk around in immaculately gelled hairdo and modern dress of today. A long, simple plait or a bun with a flower might have worked better.

Perhaps future episodes would provide the other side of truth with mistakes of and crimes committed by both “sides” getting a more balanced treatment.