The conflict between materialism and spirituality is of enduring concern for Danish Ahmed, a visual artist. 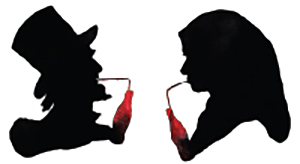 Pandemics and consumerism are unquestionably among the true unities of our globalized world. The ubiquity of branded products is testimony to their consumer appeal in the age of mass materialism. Yet, this appeal does not go entirely unquestioned. Danish Ahmed has taken on the challenge of interrogating global consumerism through his art. The conflict between materialism and spirituality is of enduring concern for the artist, and he reiterated this concern in his show provocatively titled ‘The C-Word,’ which was recently held at Chawkandi Art Gallery in Karachi was. “C” stands for consumerism, capitalism, and for the iconic drink Coca Cola. Indeed, Danish returns to the imagery of the Coke bottle (which he has previously used) to convey his concerns.

The image of the Coca Cola bottle with its alluring red color and dark, fizzy content has become a universally recognizable symbol for an easily available commodity. Many artists have incorporated this image in their work. Most famously, Andy Warhol used it in the 1960s as a celebration rather than a critique of popular culture. His 1962 painting ‘Coca-Cola (3)’ became a founding work of the Pop Art Movement. It sold at Christie’s auction in 2013 for over 57 million USD. Well before Warhol, Salvador Dali had included the image in his politically charged painting of 1943 titled ‘Poetry of America’.

In ‘The C-Word,’ Danish picks up on the familiar coke silhouette and recasts it as a symbol. It expresses his apprehensions regarding the dystopic impact of unbridled consumerism. In this manner, the product undergoes a transformation through artistic intervention, and signifies truths that go way beyond the material product that is consumed daily by millions of people. 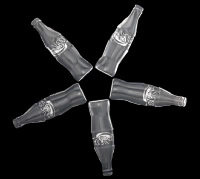 Danish works on clay board with UV inkjet digital technology, and on paper with charcoal and pastels. The digital panels are mostly diptychs on which geometrical trapezoids “float” in monochromatic black and white. The coke bottle’s imagery contributes the color red. The bottles are digitally rendered in some works, like repetitive elements that fill in a block. His work is mostly non-figurative and dominated by geometry and abstraction. The exceptions are two works in the ‘Eden’ series which portray Renaissance-style angels, and the ‘I’d Like to Buy the World a Coke’ series which portrays silhouette heads of recognizable personalities. The figures are shown drinking with straws to underscore the theme of consumerism.

The trapezoidal panels contain dark clouds and leafless tree forms. These natural elements contrast with the Coke imagery. They prompt us to reflect upon the impact industrial manufacturing has on nature. These six non-figurative works on display are grouped as a series under the paradoxical title: ‘Ice Cold Sunshine’. This is a befitting title for these austere works. The sharp contours and restrained tones reflect the cerebral nature of Danish’s deliberations. His tight control of line and image has a quasi-mathematical quality as if an equation, with its component parts, is demanding a resolution. These artworks contain visual clues for the viewer to access the line of inquiry the artist is putting across. The key to unlocking the puzzle lies in the geometry.

A video loop titled ‘I am a Coke Fan’ depicts five coke bottles that radiate like spokes of a propeller. They alternately spin into a blurred sphere and then come to rest. The bases of the bottle touch end-to-end and form the shape of the pentagon. It is tempting to speculate whether the artist is delivering a visual pun with this shape. Should the pentagon also be read as The Pentagon? What is the kinetic force that propels the spinning movement?

The coke bottle morphs into a symbol for the modern age. It is a commodity that engenders its own myths and realities. No wonder so many artists have engaged with this image. One can be sure ‘The C word’ is not going to be the last word.

The writer is an art critic, landscape designer and horticulturalist. She can be reached at nusrat.khawaja@gmail.com