The women’s rights activists in Pakistan have wrongly been inspired by the West. Doing so, they try to apply the social, cultural, and gender race dynamics of the West to Muslim nations. 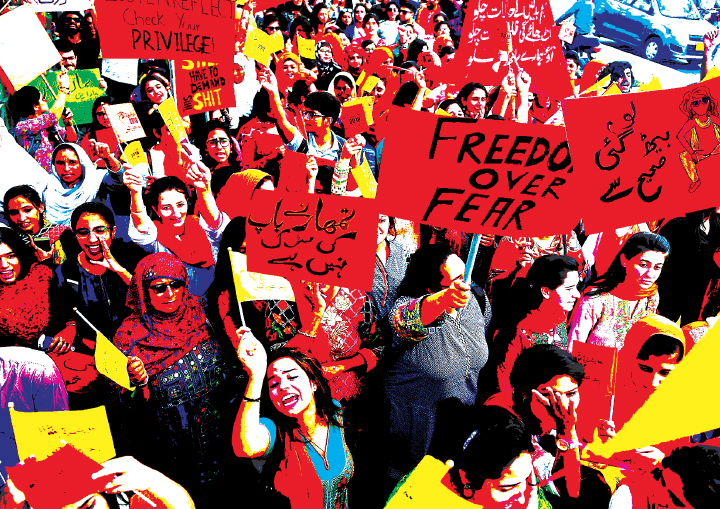 Driving back from an errand, I sat back engrossed in my thoughts. However, just as we were passing down Karachi’s Frere Hall, my chain of thoughts was abruptly disrupted as we halted and seemed we were in fact stuck in a traffic jam. However, I couldn’t make out the apparent reason for the gridlock, but as we inched a bit further, I could hear loud chanting and shouts.

Oh! What on Earth is that? What has happened?

‘What does this mean? What do women want and what sort of demands are they making?’ My mind was perplexed and it was totally incomprehensible and unfathomable. The writings on the placards had jarred me. But to tell you the truth, I was embarrassed at that moment.

On the face of it, I believe all the participants of the Aurat March were educated Muslim women, not minorities, or any other alien species. I was thinking that as Islam has already given so many rights and freedom to women, and it’s all in the Holy Quran, specifically mentioned in many surahs (chapters), particularly Surah An-Nisa, the fourth chapter of the Quran, then what’s it all about and why the hullabaloo? As Islam has clearly chalked out the rights and freedom for women and of course with the rights comes the responsibilities and obligations, as rightly said by Frank Ryan, a retired colonel of the US marines, ‘Rights without responsibilities end in tyranny.’

Obviously, the self-assured gladiators of women’s rights and freedom, must have missed reading through the Holy Quran with depth and they have not internalized Allah’s message.

First, we must try to understand the difference between freedom and rights, as freedom does not give us the license to do whatever we like and we have a moral obligation and responsibility towards our society. 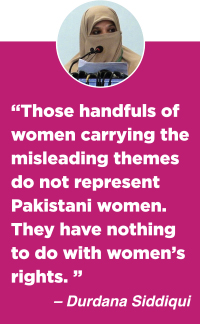 Islam liberated and empowered women hundreds of years ago, giving them the equal right to education, the right to own property, the right of inheritance, the right to choose their spouse, coupled with the right to divorce him through ‘Khula’, as well as the right to own and conduct their own businesses. And we have one great example, and that of Hazrat Khadija (R.A.), the first wife of the Holy Prophet Muhammad (P.B.U.H).

Islam established the institution of Mahr, an obligation duly mentioned in the marriage contact, which is paid by the groom to her bride in the form of money or possessions at the time of marriage or later. Post the advent of Islam about 1443 years before, women had the freedom to step out of their homes to seek guidance from the Holy Prophet (P.B.U.H). Enjoying an absolute freedom to question, women were able to come to the Holy Prophet (P.B.U.H) even with complaints of their husbands. Women were not enslaved or only confined to housework and the Holy Prophet by himself set an example by helping his wives with house chores. They were free to go to battlefields as helpers, as water bearers and as nurses for the wounded.

Islam brought in a revolutionary change of attitude in society towards women, who are given respect as a mother, enjoying great respect and obedience from her children. They were given the right of inheritance, as a daughter, as a wife and as a mother, and according to the laws stated in the Quran and Shariah, she must be given her fair share and cannot be forced to give her earnings to her spouse against her will. In Islam, a woman even has the right to divorce, then what other rights and what sort of freedom these women marching out in the street in droves with indecent placards and shameful slogans want. The site of the Aurat March was indeed mind-boggling.

In Islam, unlike such other mainstream religions as Hinduism, marrying a widow is like an honorable gesture on part of the man who willingly marries a widow to provide for her well-being and security. When it comes to women, there are different scenarios across the world, and different regions have their own social and cultural norms and we, the Muslims, just cannot blindly go about copying the Western model . In fact, every society has its well-defined norms and values, and in all civilized societies there are certain dress codes and pertinent rules to adhere to. To dress modestly is not taking away the rights or freedom of other women.

Knowing the fact that Islam is the leading religion which supports women’s rights as well as their freedom, perhaps the important question we should raise as to how the women’s rights activists in Pakistan have wrongly been inspired by the West and they try to apply the social, cultural, and gender race dynamics of the West to Muslim countries.

The writer is the author of many books. She can be reached at humeyra@gmail.com