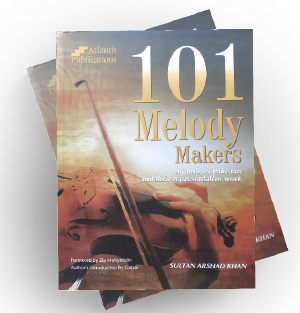 Would you believe that some 23 years ago this scribe thought that he could be the co-author of this incredible tome titled ‘101 Melody Makers of India and Pakistan and Their Representative Work’? The reason was not any scholarship on his part but it just happened that he threw the idea at Sultan Arshad Khan that such a book should be written. (The author has mentioned this in the preface of the book). Quite another matter that one had the wisdom to back out; realizing that the venture was indeed stupendous work – and discretion was the better part of valour!

After serving the Pakistan International Airlines at home and abroad, the author Sultan Arshad Khan got his last posting at the city of his dream, Bombay (Mumbai) as Manager for North India. He spent about 9 glorious years of his career in Bombay. Here, he not only served and promoted the national airline but also got the opportunity to brush shoulders with the high and mighty of the Indian film industry. Sultan Arshad’s amiable disposition and knowledge of film music and their composers helped him to come close to and befriend many icons of the film world: composers, singers, lyricists and many others. His childhood passion for film songs came alive in full bloom as he interacted with the aforementioned people whom he had hero-worshipped all his life.

We came to know of his insight into film music and the repertoire of the melody makers, as well as many interesting anecdotes of the film world when I, my wife and daughters had the good fortune to visit Bombay and stay with his family at his Cuff Parade apartment in 1990. We at once integrated in the family – his wife Najma, son Shahryar and daughter Kiran – and for a fortnight, apart from enjoying their love and hospitality, had the opportunity to be introduced to a number of the film greats: Dilip Kumar, Gulzar, Talat Mahmood, Manna Dey, Asha Bhosle, Naushad, Laxmikant–Pyarelal, Ravendra Jain, Kalyanji, Ustad Allah Rakha, Pandit Hariprashad Chaurasia and many others. 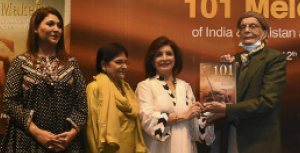 After his long sojourn in Bombay, Arshad was transferred back to Karachi. His stay and regular interaction with the film world’s personalities had greatly enhanced his knowledge of film music, and when I threw the idea at him that it was now incumbent upon him to record the history of the work of the great melody makers, he at once agreed. He got down to the strenuous task of gathering the data and research, while visualizing the designs started at Oscar Advertising. It was later taken up by Pervez Iqbal and Shahid Iqbal of BBCL Communication. The younger Iqbal, Shahid, very ably gave the book its present shape. In the meantime, Arshad talked to his friends in Bombay about the project. The laudatory messages from people as eminent and iconic as Anil Biswas, Naushad, Gulzar, O.P. Nayyar, Robin Ghosh, Nisar Bazmi, Sohail Rana and Ameen Seyani served as great encouragement for him and strengthened his resolve.

The book’s contents are so outstretched that it is not possible to review the entire work in a limited space. Suffice to say that it was no easy task to write a book containing 652 pages that cover as many as 101 music directors, 228 lyricists and 223 vocalists. This is in addition to filmography of the composers and countless songs selected each with mention of their respective film, year, vocalist and lyricist. Not only that. Arshad had to collect as many as 1177 photographs to go with the book!

The final product has turned out to become a priceless research, rather encyclopaedic publication for libraries, universities, art and culture institutions as welll as for the coffee table of the connoisseur.