In the post-colonial era, changing conditions in India have
made many puppetry traditions extinct but there are interest groups that
carry some vestiges of the art forward. 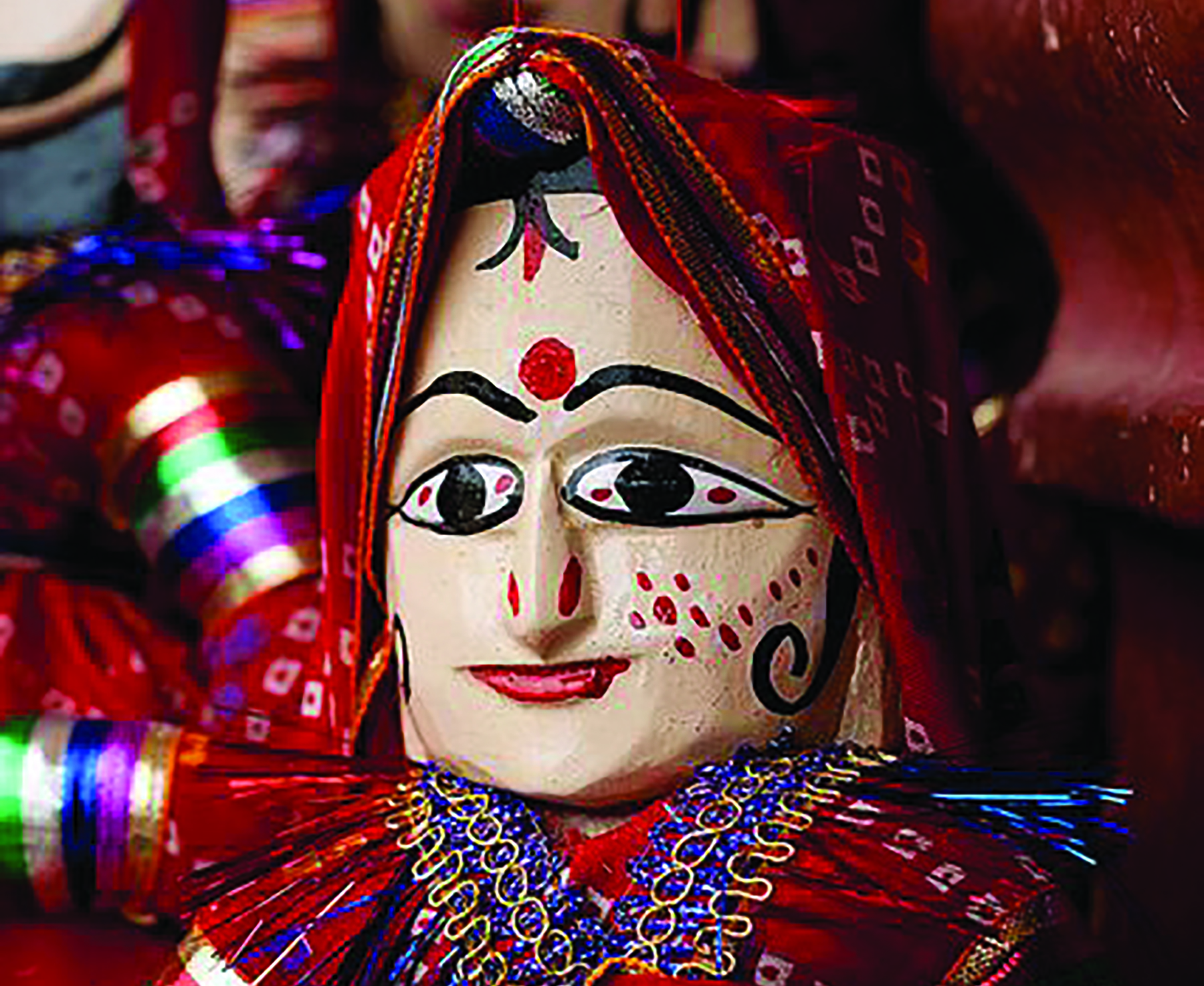 Puppetry is a type of narrative theatre; at the crossroads between bardic storytelling and theatrical performance. In India, puppetry is not only a means of entertainment, but also a form of cultural and religious dissemination. Several traditional puppet genres in India mirror the country’s rich heritage in communal inclusivity, regional values and cultural plurality.

The foundations of puppetry in India cannot be authentically traced; however, mythology provides two fundamental tales that are witness to the importance of this art. According to one legend, the originator Brahma gave life to the adi—the first nat puppeteer—and created the first puppet in order to entertain his wife, Saraswati. Not satiated with his work, Brahma banished the puppeteer to earth, starting the line of nat bhatt puppeteers. This legend applies to the Rajasthani puppet tradition as well, nat bhatt being the name of the puppeteer cast from this region.

An alternative legend has a protagonist—the god Shiva—patron of puppetry, and his wife Parvati. An artisan synthesized two wooden dolls that captured the attention of Parvati. The goddess and her celestial companion entered the dolls, beginning an exquisite dance. Soon, however, the two got sick of this dance game, eventually abandoning the dolls. The artisan was very sad at his dolls being lifeless again. With the help and blessings of the gods, the artisan then invented a system of strings to move the dolls, and so puppetry was born.

Divine foundations are stressed as the origin of Indian puppetry, which testifies the importance of puppetry in India. These days, traditional puppetry is regarded as a folk art form, mostly reflecting the rural environment. However, in the past it was revered and celebrated by the urban elite and among the nobles as well. Evidence of the link of puppetry with the highest social groups is in the attestation of the word gombe, meaning puppet, used as a surname for Brahmin families in the southern regions of India.

In the post-colonial era, changing conditions in India put many of the puppetry traditions at risk of extinction; numerous government and private initiatives contributed to save the quickly vanishing styles and traditions, but many are still struggling for survival in the age of the internet.

Independent India opened up to cultural and artistic interchange, and this was how new forms and techniques affected puppetry, introducing new styles and giving origin to a distinctive urban puppet theatre, Foley and Pudumjee, in 2013. The birth of modern ensembles and the arrival of international prospects created new contexts for traditional puppetry to flourish.

Genres in puppetry are strongly related to other traditions in India as well. Puppetry has an intense connection with the actors, the theatrical concepts, regional dance-drama, and with visual art traditions.

Puppetry manifests a number of regional customs and practices in local languages, but some distinctive elements point the association to the characteristic Sanskrit drama. The interlacing of text, sound, rhythm and movement, and the manifestation of characters like Sutradhara and the clown make puppetry’s connection with Sanskrit drama instrumental.

Puppet shows are customarily linked to a ritual context — performances are typically held during festivals or celebrations such as marriages and/or other communal occasions. Sometimes puppet plays are performed in order to ward off evil spirits or to solicit rain in times of draught.

There are many types of puppets in India; some conducts and customs in Indian puppetry have become extinct, while others struggle to survive. In addition to the conventional puppet genres, India is home to many contemporary initiatives that restore puppetry while supporting the preservation of heritage styles. The existing traditions include different types of puppets: string puppets, rod puppets, glove puppets and shadow puppets.

String puppets, more precisely known as marionettes, can be made of different materials such as wood and terracotta; they are tri-dimensional and as the name suggests, are moved by strings attached to the head and limbs. The number of strings determines the strength of grip on the puppets. Marionettes are widespread in India from North to South; illustrious traditions are reported from Rajasthan (kathputli), West Bengal (tarer putul nach), Maharashtra (kalasutri bahulya), Odisha (gopalila kundhei), Karnataka (yakshagana gombeyata), Kerala (nool pavakothu), Tamil Nadu (bommalattam), Andhra Pradesh and Telangana.
Rod puppetry is frequently displayed in the southern regions of West Bengal. It is known in the local language as danger putul nach. These puppets have an unusual style: they have large dimensions that can reach up to 1.2 metres and weigh up to ten kilograms.

In glove puppetry, the puppeteer operates the puppets from below, sliding his hand into the puppet; usually the forefinger operating the head, while the thumb and third finger move the hands.
Most of the puppetry customs from the south of India narrate epic stories. In the north, however, there are interesting exceptions such as the Gulabo-Sitabo glove puppetry from Uttar Pradesh. This rapidly diminishing tradition theatrically articulates the quarrels between the officious Gulabo and the submissive Sitabo, both married to the same man. The representation of this folk story with glove puppets traces its origins to the 17th century in the area around Lucknow.

Shadow puppetry is widespread in South India, which ostensibly appears to be the homeland of this art; this genre is known in Odisha as ravanachhaya, in Andhra Pradesh and Telangana as tholu bommalatta, in Karnataka as togalu gombe atta, in Kerala as tholpava koothu, in Tamil Nadu as thol bommalatta and in Maharashtra as charma bahuli natya. Shadow theatre is known in Sanskrit literature as chaya nataka. The shadow puppets are manufactured in such a way that their very conception reveals common traits among the many Indian traditions.

Regional diversity cannot conceal the several conjoint traits among puppetry traditions such as the same literary sources. There is a similar structure of the plays with opening supplication, comic skits and/or interpolation regarding the existing socio-political issues, musical accompaniment, the plot featuring occasional dance performances and a moral content mostly linked to religion. All these display the individualistic identities of the various communities in India.

Ample festivals conducted in the last decades have offered the stage to traditional troupes. The new age has, thus far, has threatened the very survival of traditional puppetry in India. However, a more realistic use of contemporary means and opportunities is actually the key to preserving this rich heritage.